A last minute request to do my Civil War program for Cromaine Public Library at the Hartland Senior Activity Center this Tuesday at 7 p.m. sent me reviewing my Civil War material to be sure and meet their program title of "Not Just a Man's War."

I will, as usual, portray Liberetta Lerich Green, whose family were abolitionists operating an Underground Railroad Station in Shelby Township.  Her brothers both were in Michigan Infantry regiments.  Younger brother, Isaac (Ike), was in the 3d Michigan Infantry alongside his brother, Will, in the 5th Michigan Infantry.  I've paid a lot of attention to the 5th, but the 3d was even more decimated so that Ike may have mustered in as a bugle boy, but by the time he finally left the military in San Antonio, he was a major.  Along the way he wound up eventually in the fighting that left the Potomac and went out to the southwest.  I can well believe he had at least a nodding knowledge of the Memphis Hospital where Union Soldiers were treated.

Mary Ann Bickerdyke, known as Mother Bickerdyke for her caring nature as hospital administrator is the subject of today's story written by Mary Livermore, who was a kindred spirit.  Livermore was a 19th century reformer journalist, abolitionist, and early advocate of women's rights who headed the United States Sanitary Commission, a private aid agency  for soldiers in the war who were sick or injured.  Chicago also features in this story because that was where the U.S.S.C. was headquartered.  The paragraph on Women in the USSC is worth reading for a highly condensed view of Women in the Civil War.

Families throughout the Union with sons, brothers, and husbands in the fight were eager to send food to help soldiers in the hospitals.

After the story of "Loyal Cows and Hens" I will add an incident from the Wikipedia article for yet another view of how this woman was an unstoppable force.

The story starts with a few lines that wouldn't size up properly with my scan of Livermore's story.  With so little, it's easier to type the introductory section.

It was more difficult to supply the hospitals with milk and eggs than with any other necessaries.  With the supplies furnished by government, the tea, coffee, sugar, flour, meat and other like articles, 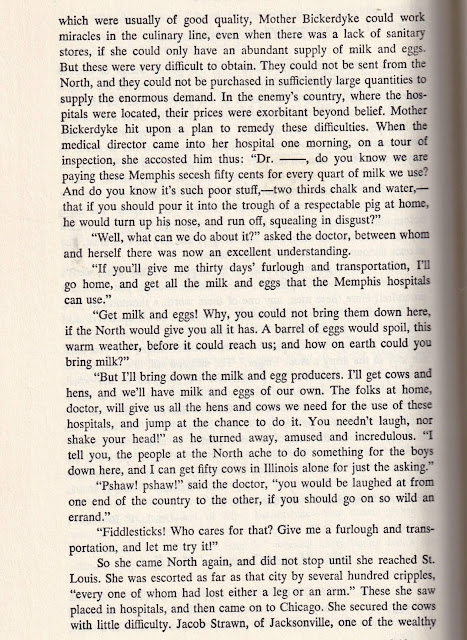 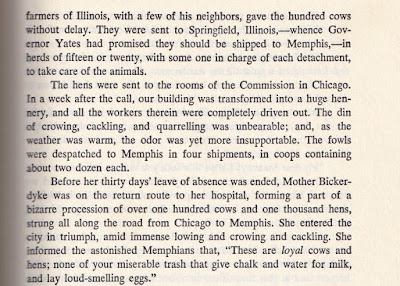 And this paragraph from the opening of the Wikipedia paragraph about her Civil War service:


Mary Bickerdyke served in the Civil War from June 9, 1861 to March 20, 1865, working in a total of nineteen battles.[7] Bickerdyke was described as a determined nurse who did not let anyone stand in the way of her duties.[8] Her patients, the enlisted soldiers, referred to her as "Mother" Bickerdyke because of her caring nature.[9][10][8] When a surgeon questioned her authority to take some action, she replied, "On the authority of Lord God Almighty, have you anything that outranks that?"[11][12] In reality, her authority came from her reputation with the Sanitary Commission and her popularity with the enlisted men.[13]

Wikipedia also tells of the "Loyal Cows and Hens" she acquired, saying General Hurlbut set aside President's Island as pasture for them -- along with permitting her chosen staff of escaped and former slaves to tend them.
********************