Something Old and Something New

Usually the phrase "Something old and something new" is part of the planning for a wedding, but not today.  I'm excited to announce two things fitting that phrase.

My website has been around it seems like forever!  I created it back when I was still on Earthlink email.  (Remember back to that email?)  They let me create a website using simple tools and start there with my posting it.  Loved the look of it and over the years maintained it with a website builder.  Google has begun to penalize websites unable to re-size to cell phones.  It's called a "responsive site."  (I'm interested in how many read this blog on a cell phone & the difficulty of viewing it.  I know it works on templates, but am uncertain the blog needs a complete redesign after ten and a half years which might create problems with the archive.)  My website is probably mainly accessed from a desktop considering the venues hiring me, but I didn't want it being downgraded by Google Search.

I've long believed in being able to maintain my own website, but this was definitely beyond me.  Looking around I was fortunate enough to discover a very talented web designer, Rick Dery.  He has a large number of website clients, but doubt he had worked before with performers, certainly not a storyteller.  He took my old site information and a great many photos of me in my work and Ta DAAAA, https://www.lois-sez.com/ is fresh and new.  (If you still see those old blue tiles framing pages, refresh your browser to see the new version of the site.)  My work is quite varied, but a lot of those photos show my historical storytelling work or my work with puppets.  While I do a lot in schools and libraries, there's a problem showing young audiences (although one program at a school in the Dominican Republic was able to be used).  No website is ever finished.  At least annually I need to revise it, but now I'll have Rick do it.  (YES, I definitely recommend him.) 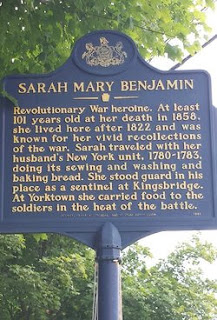 My other "Something old and something new" has me looking ahead to the U.S. Revolutionary War.  What's that, you say that's behind?  Yes, and yet America 250 is coming, bringing renewed attention to the period in 2026, the 250th anniversary.  I found a delightful woman, Sarah Matthews Reed Osborn Benjamin, who received a pension for her work during the war.  Her first husband, William Reed, died in the war.  Her second husband joined up without telling her and then insisted she travel with his military unit, cooking, sewing, and washing.  Along the way she twice talked with General Washington, first at Knightsbridge where she was standing guard wearing her husband's heavy overcoat and bearing his gun.  Later he talked with her at the Battle of Yorktown, where she additionally witnessed the crying surrender of a "portly" British general.  It wasn't Cornwallis as she saw him, too, and said he had a diminutive appearance and crossed eyes.  She also had a brief third marriage to John Benjamin before again being widowed.  There's much more, of course, to her story and I'm getting more and more excited as I gather as much information as possible from here in faraway Michigan (frontier territory she never saw) roughly 250 years later.  She lived long enough that a photo was taken of her  at well over 100 years old. 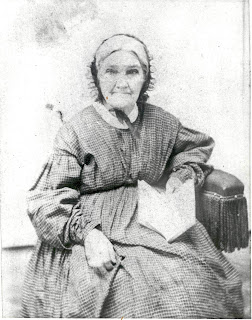 With her many last names, I have already named the program, "They called me Sarah."

I can picture keeping her story alive whenever a group looks at the Revolutionary War, but also she's a woman deserving of attention in Women's History Month.  I plan to keep her alive with the style she showed all of her years.  Her obituary article mentions how she would "relate the events of her early days with all the vivacity of youth."  Can you see why she's exciting this storyteller and I feel at home with her? 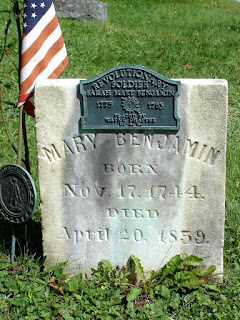