Baum - How the First Stockings... - Keeping the Public in Public Domain


Just as Dr. Seuss's Grinch is now THE popular story for Christmas, over the years there's an old traditional tale of Santa Claus that goes beyond "A Visit from St. Nicholas" -- the 1823 poem (complete with author controversy) and the popular 1881 illustration by Thomas Nast.

Frank Baum's The Wonderful Wizard of Oz was the best selling children's book of his time (1900 and 1901) and its popularity led to 13 nearly annual Oz creations.  Before those sequels, however, in 1902 he published a very unusual look at The Life and Adventures of Santa Claus.  It relates Santa's life, from childhood as a foundling adopted by the wood nymph, Necile, through discovering his role in life that matches what we know, but is developed and done in ways unlike those you may know, and on into old age and how he gained immortality. I had heard about it for several years before I finally found my own copy.  I also love the illustrations done by Mary Cowles Clark (1870-1950).  She's not well-covered by online research, but since she was originally from Syracuse, New York, where Baum once lived, it's believed he met her on visits back to the town and chose her to illustrate the book.  She didn't illustrate many books and this was her best known work, but here's a link to a few of examples of her charming work at a digital exhibit by the Nantucket Art Colony.

I was surprised to find the first edition contained 20 full color plates.  By the second printing it only had 12 color plates and many black and white illustrations.  My own paperback volume was less costly, with black and white illustrations to open the three "books" of Claus's life, along with charming openings and closings for each chapter, plus a dedication page to Baum's son.  Dover Publications created a version that is now out of print.  My own copy was a book club edition from the New American Library.  Unfortunately my book would fall apart if I scanned it.  Further unfortunately, the online digital publication from Project Gutenberg omits the illustrations.  (P.G. even has audio downloads of the story.)  To see any of those illustrations you will either have to purchase it or borrow it.  That's the bad news.  The good news is that Michael Hague, who does wonderful illustrations of Public Domain children's books, has done his own version while keeping the Baum text.

Another considerably abbreviated version, but with attractive illustrations, is by Janeen R. Adil.  Perhaps you will find that version helpful if you wish to tell the Baum adventures, but I would strongly advise seeing the original text first.  Storytelling literary tales often works best with careful editing, but first be sure you check to see if you are omitting too much.  Speaking of an abbreviated version, I'm told there's a claymation movie version of the story that was a 1985 television special, but haven't seen it.

Baum's text is done in folklore style.  His book creatively explores the connection between toys and gifts at Christmas and how the familiar elements like reindeer, stockings, and the tree became part of the holiday.  Some other year I'd like to post how it says he became called Santa Claus.  It is as close as the book comes to mentioning Saint Nicholas.

For a taste of  Clark's style, I open "Chapter Eleventh -- How the First Stockings Were Hung by the Chimney" with partial scans of the opening illustration and at the end of the closing picture for the chapter.  (Wish I could flatten the book without hurting it.)  I'm giving the entire chapter as it gives a glimpse of some of those other Christmas elements, but the story actually matching the chapter title begins near the end of the chapter.  I'll mark that spot for you. 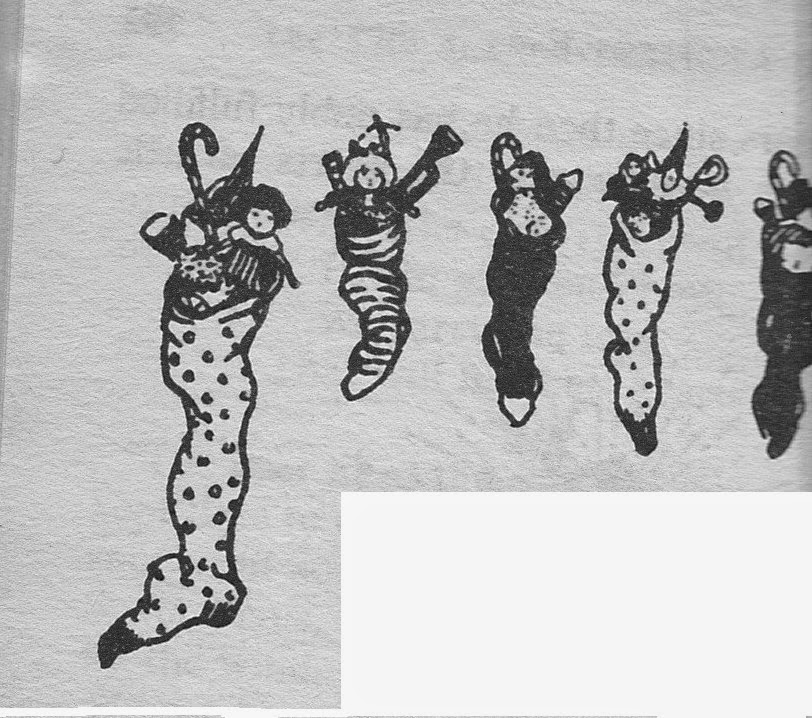 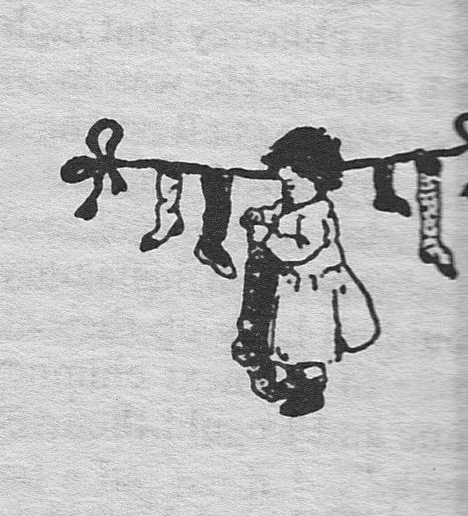 May your Christmas be merry and the coming New Year be filled with Storytelling (and, yes, Research).
*****************
This is part of a series of postings of stories under the category, "Keeping the Public in Public Domain."  The idea behind Public Domain was to preserve our cultural heritage after the authors and their immediate heirs were compensated.  I feel strongly current copyright law delays this intent on works of the 20th century.  My own library of folklore includes so many books within the Public Domain I decided to share stories from them.  I hope you enjoy discovering new stories.


There are many online resources for Public Domain stories, none for folklore is as ambitious as fellow storyteller, Yoel Perez's database, Yashpeh, the International Folktales Collection.  I recommended it earlier and want to continue to do so.  Have fun discovering even more stories!