I've long loved Valery Carrick's Picture Tales series of books.  Three are included in my "Russophilia" biography as they are specifically Russian peasant tales.  Those Russian titles are safely in the Public Domain.  His Picture Tales books, including those three and more, were originally published in Russian in 1912-1919 in St. Petersburg and Moscow, then the first three came out in English in 1913-1915.  So why is only the second book, More Russian Picture Tales, available online?  Why, even though he has a fascinating background, is Carrick barely an online English footnote? (He has an article in the Norwegian Wikipedia and in the Russian Wikipedia.)  A bit of mystery also surrounds his later books that don't have Russian in the title.  While published in the mid-1920s and their copyright doesn't seem to be renewed, I can't guarantee they are in Public Domain so I won't post them.  His simple stories are often excellent "nursery tales" as shown by his first book being included in the Waldorf curriculum for Kindergarten, but the text is not given.  Similarly Project Aruna, a Japanese site for learning to read English, uses various stories, but only from More Russian Picture Tales as part of its many free graded readers.

Have I aroused your curiosity?
I'll pass the results of my search about Carrick later in a special post outside my usual schedule after my third and final post of stories from each of the Russian Picture Tales.

This is from the first book, Picture Tales from the Russian, written and illustrated by Valery Carrick and translated by Nevill Forbes. 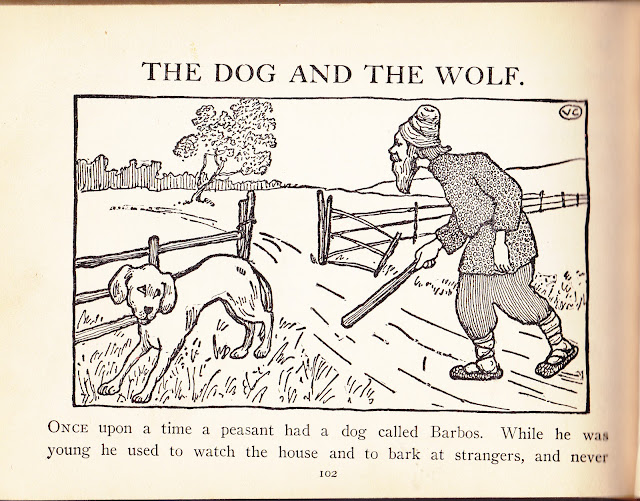 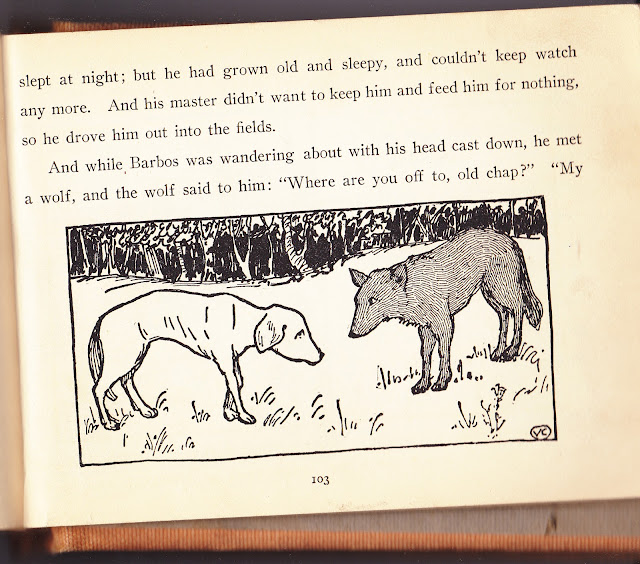 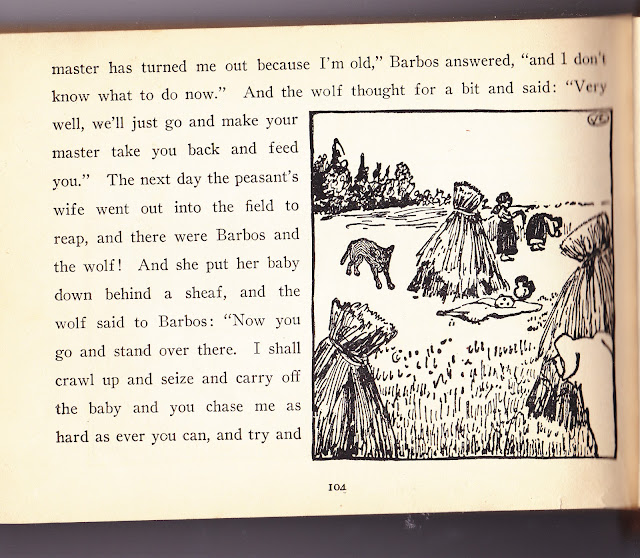 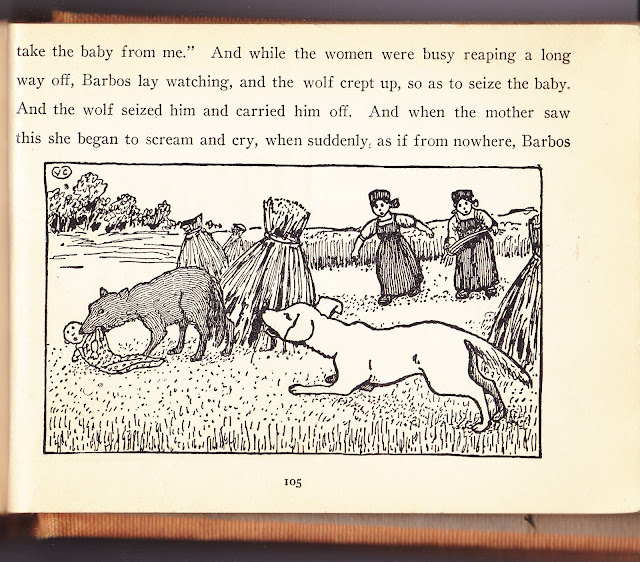 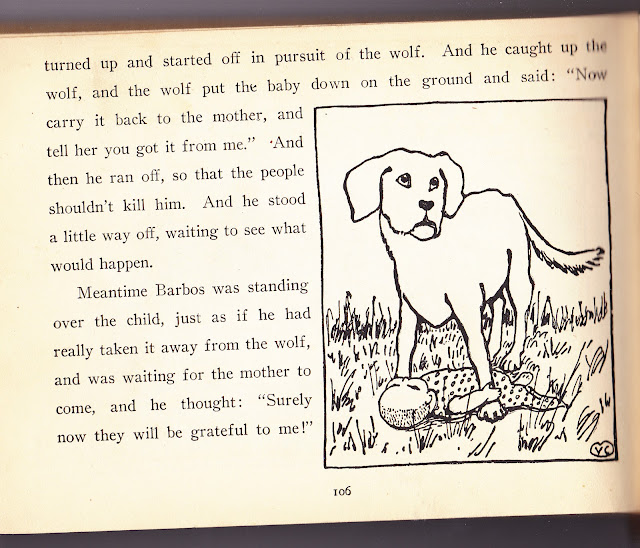 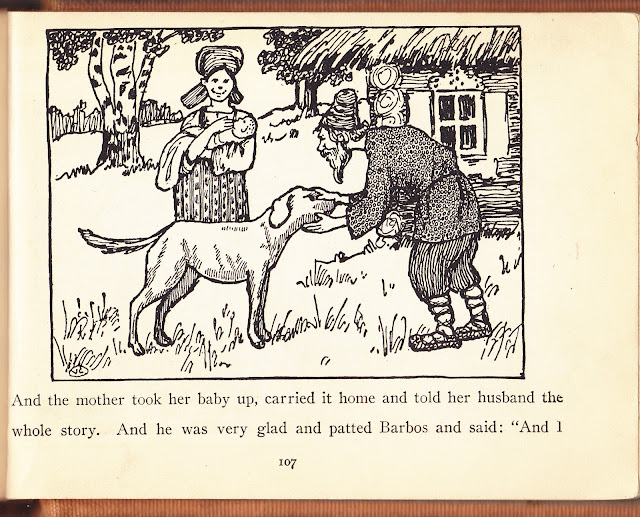 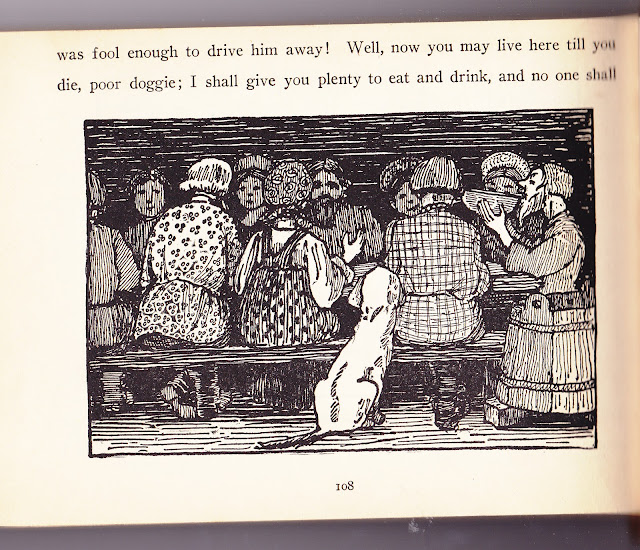 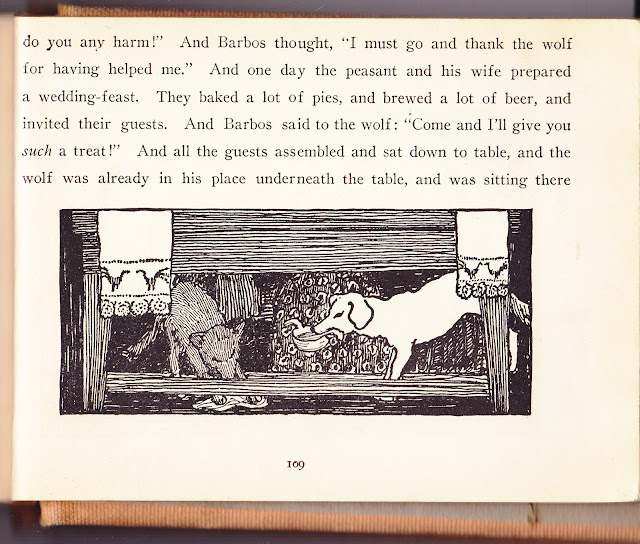 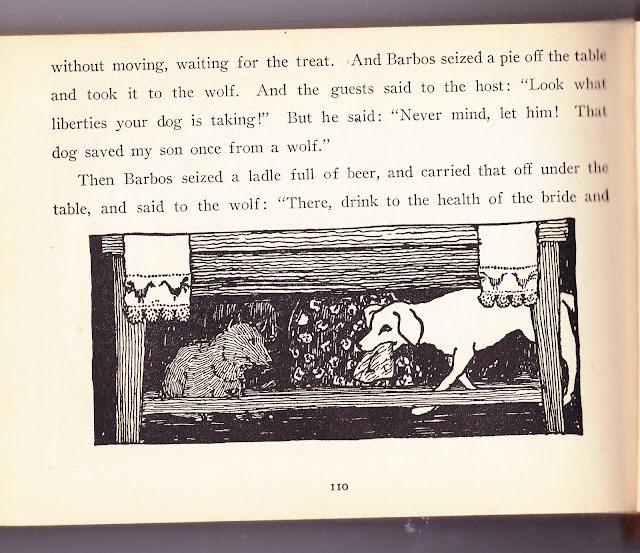 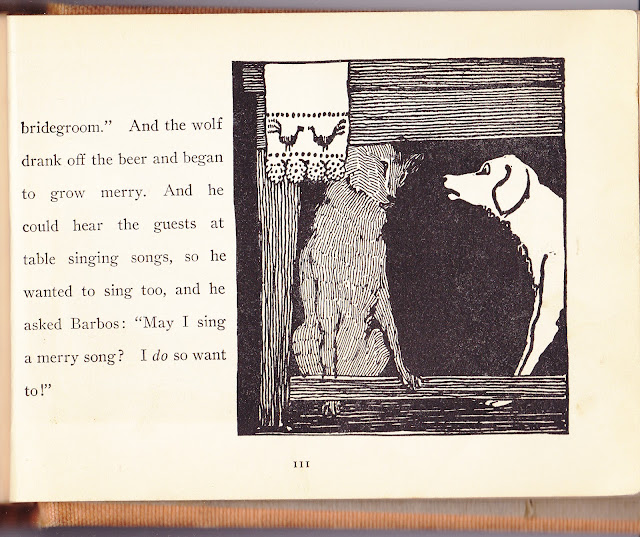 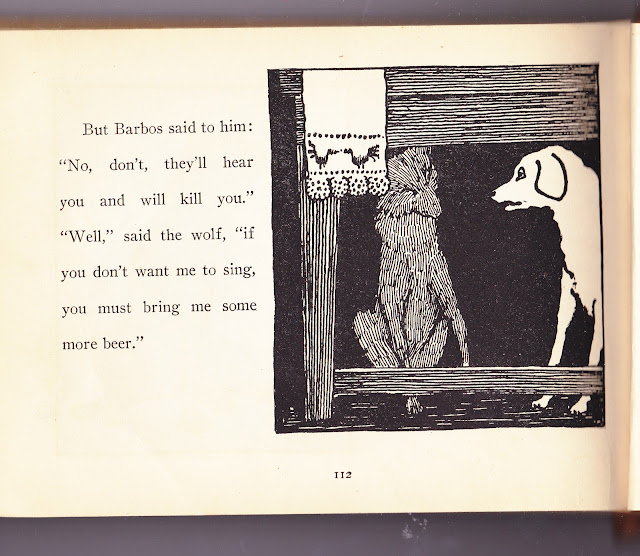 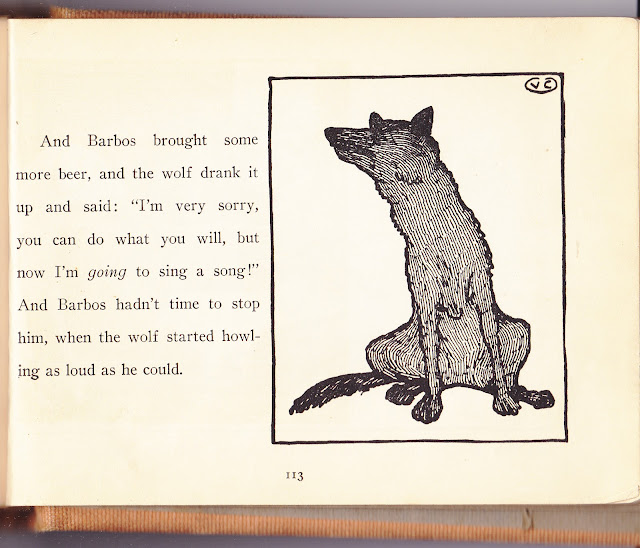 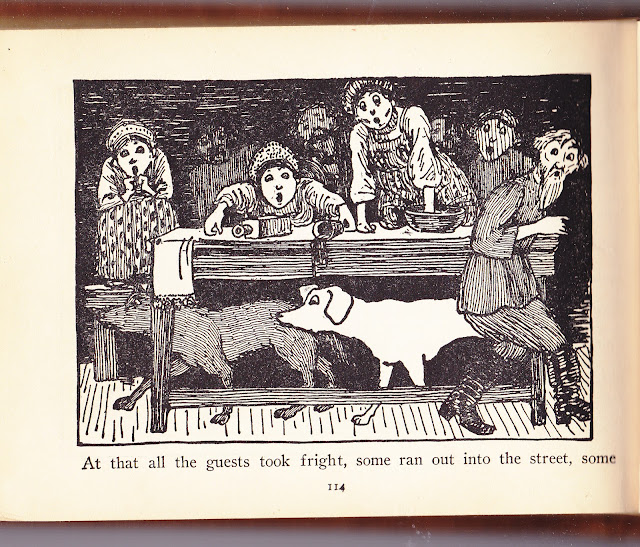 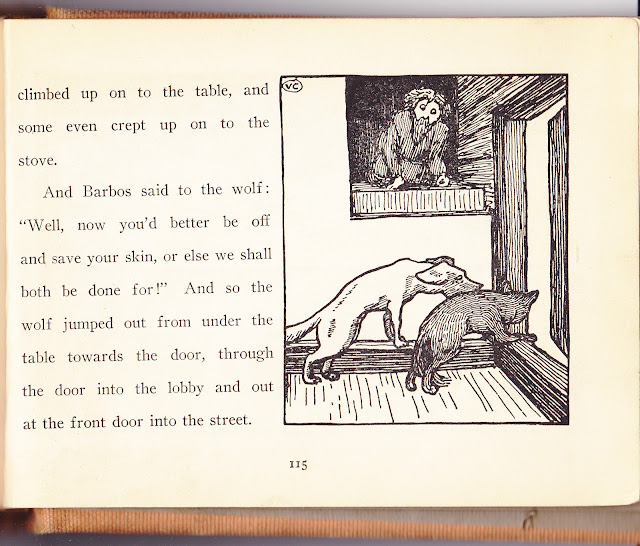 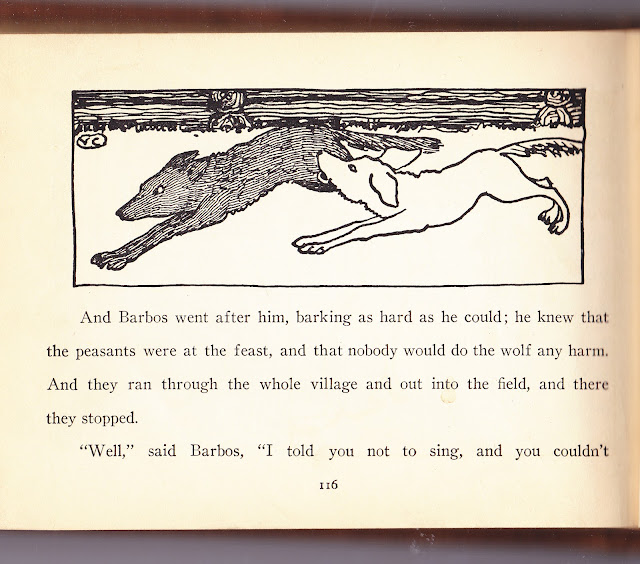 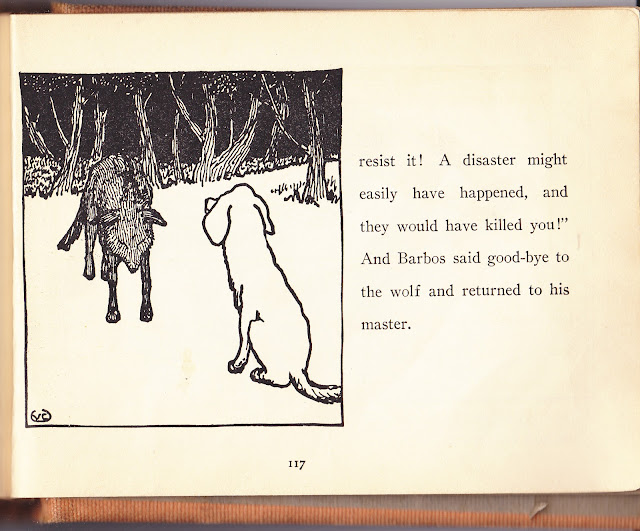 I didn't take one of the simplest stories in the book.  Instead I chose this story in contrast to a sadder legendary Welsh tale, Beth Gelert.  My favorite version of that story is told by Joseph Jacobs.  Two versions, one by Jacobs and another by Horace Scudder, are posted on Professor D.L. Ashliman's excellent site, along with three other versions of the Aarne-Thompson-Uther type 178A.  (For more about the AT Tale Types, go back to the article here by Wendy Welch, called The AT Numbers Unattached or Researching Your Stories Print Versions.)

Next time I'll choose a trickster tale that reminds me of another story in Picture Tales from the Russian, "Mr. Samson Cat."  Unfortunately, since that book is not online, you'll either have to borrow or buy that book to read about the clever cat who married the Widow Fox.
*****************************************
This is part of a series of bi-weekly posting of stories under the category, "Keeping the Public in Public Domain."  The idea behind Public Domain was to preserve our cultural heritage after the authors and their immediate heirs were compensated.  I feel strongly current copyright law delays this intent on works of the 20th century.  I hope you enjoy discovering new stories.