It's been like being in a time machine while in Charlevoix devoting myself to their Prohibition history and incorporating it into my program, "High Times in the Dry Times" which is finally beyond the Preview stage.  The northern Michigan era may not have been part of the way so much of what was seen in the Detroit/St. Clair area when we supplied 75% of the smuggled alcohol during Prohibition, but they certainly knew how to join in roaring through the Roaring '20s.  The early Twentieth Century was when they began to develop into one of Michigan's resort areas.  It's an interesting area and the northern part of Michigan is at least a week or two ahead of metro Detroit's entry into autumn colors.

I promised to give recipes from a recent book called What to Drink: Non-Alcoholic Drinks and Cocktails Served During Prohibition by Bertha E.L. Stockbridge, which is a reprint of a 1920 book, What to Drink; The Blue Book of Beverages; Recipes and Directions for Making and Serving Non-Alcoholic Drinks for All Occasions.  That link takes you to Archive.org's online version.  Part One of this included the Table of Contents and I presumed I'd be giving some of the Fruitades, but confess there's been enough of a chill in the air I decided instead to give some hot drinks served in Prohibition and beyond.  I'll also include a variety of "mocktails" as that's the essence of Stockbridge's purpose.

I'll end with a nod to those who worked to create the "Noble Experiment" that might have succeeded if the Depression hadn't convinced people, along with the rise in crime, that it was time to return to alcohol, if nothing else to regulate and tax it.  The parallels to the legalization of marijuana have to be left to my audience as my persona telling about "High Times in the Dry Times" is firmly in the 1930s.

What could be more innocent than having a Malted Milk at the local ice cream shop?  When you hear the term, "Blind Pig", maybe it doesn't make sense to present day listeners.  During Prohibition it meant going to a location that, unlike a "Speakeasy", claimed to be legitimate, like an ice cream shop, but served knowing customers alcohol.  If you ordered a malt there it might be a bit different than these recipes.  I also am only used to this being a cold drink.  These warm versions, even one with coffee, are a bit different. 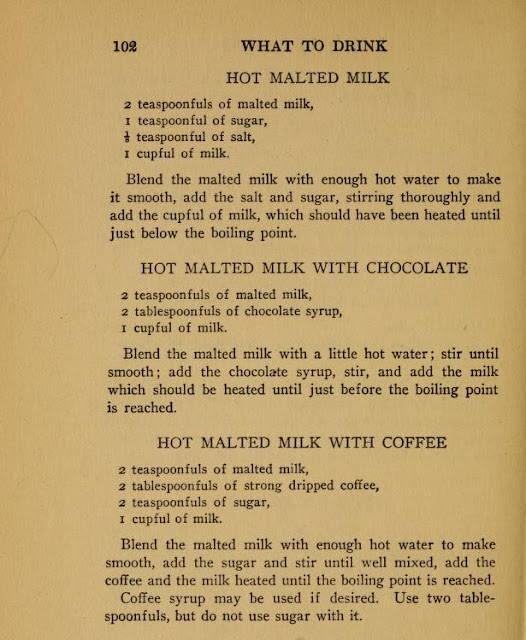 Of course we're used to Hot Chocolate or Cocoa, but here's something a bit different, two Creole versions and one from New England. 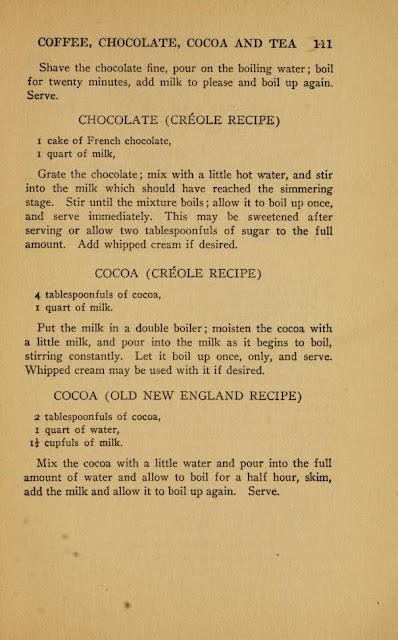 I confess I'm not likely to make the first version requiring grating the chocolate, but maybe you're more of a "foodie" and want to see the difference French chocolate makes.

While discussing malts, I mentioned coffee and realize nowadays coffee recipes and coffee shops are everywhere, but here's the '20s look at it with a bit of international versions.  I found the comment about Parisian housekeepers interesting.  My Scottish ancestry makes me wonder if I should try this in my Mr. Coffee? 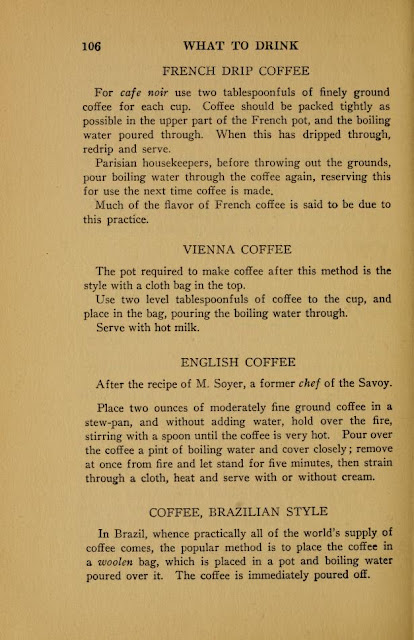 I wasn't overly impressed with Stockbridge and tea except for these ideas: she suggests a spray of orange blossom in the tea or mint and then pour the hot tea over it.

Now for a few of her cocktail substitutes. 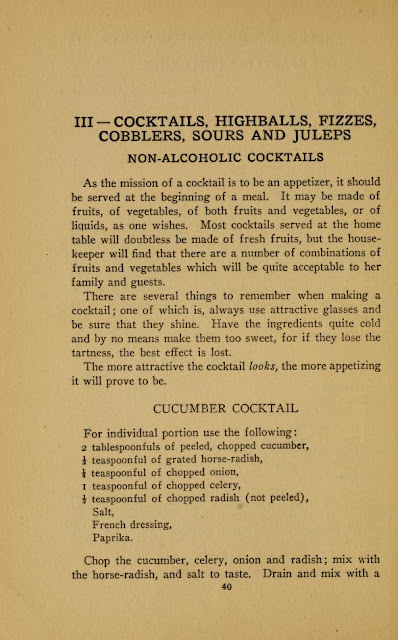 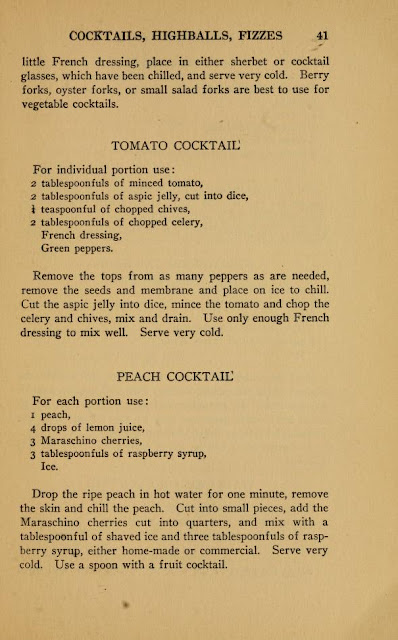 Not exactly a typical "Virgin Mary" was it?

I can't say that highballs are as popular nowadays, but they were favorites for a long time, so here's the non-alcoholic version. 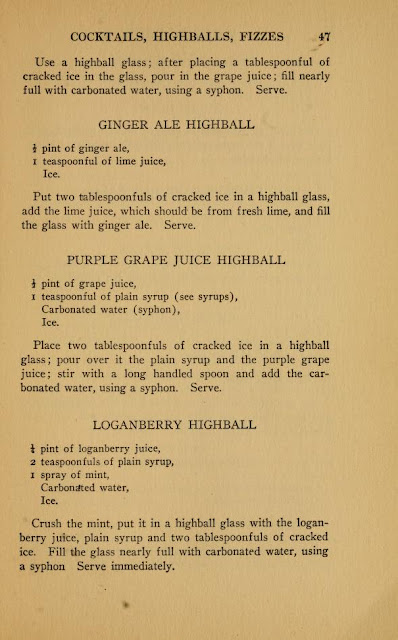 The concept of a Fizz was new to me, but confess it sounds interesting. 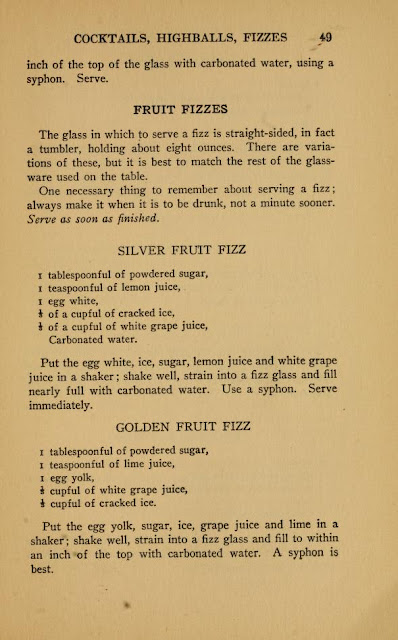 Finally I want to include a Mint Julep, and also a Ginger Ale version.  Hmmm Mint Juleps sound like something for the Kentucky Derby, but this names Georgia for its origins. 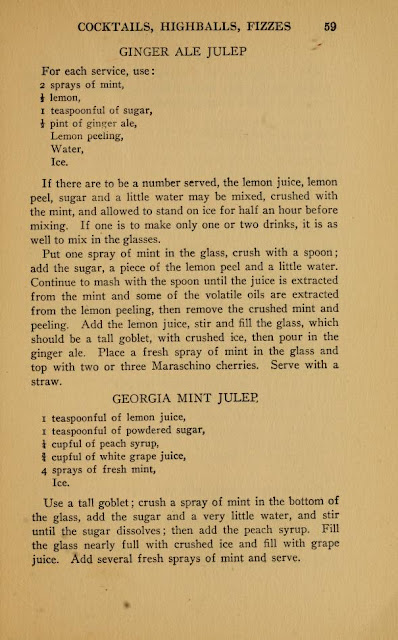 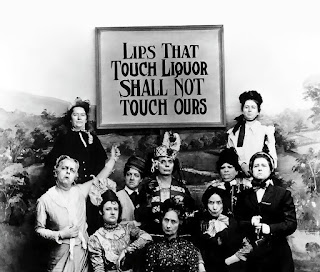 That's just a taste of what our ancestors may have tried, especially if they were in the Women's Christian Temperance Union.  Before starting to discuss these "Drys", I told my audience I needed to put on my sourest expression.  They started the nation thinking about Prohibition and then were overshadowed by the men of the Anti-Saloon League.  Still it's interesting that they were considered one of at least three possible reasons why the Charlevoix party boat,  the Keuka, known for its dance floor, gambling, and, of course, alcohol might have sunk!

Here in this area near Holly, Michigan, the most famous member of the W.C.T.U. was Carry or Carrie A. Nation, and, yes, that was her real name and she used both spellings. 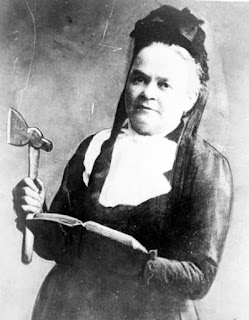 That hatchet was her trademark and to this day people in this area talk about how she attacked the Battle Alley area of downtown Holly. 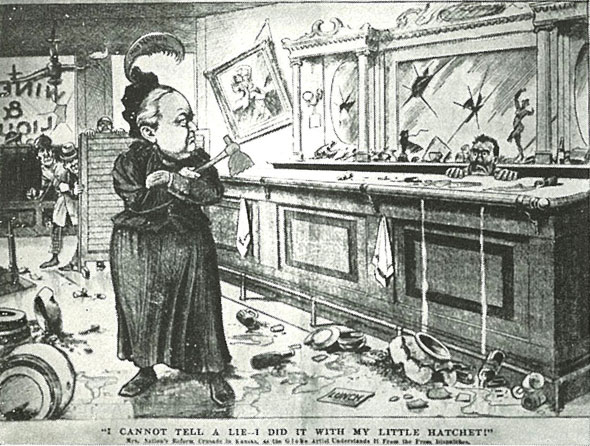 I've had the fun of being in the old Carry Nation Festival Holly held for well over 30 years.  As a lover of history, I hope some day they bring it back.

Well that's at least part of my story for this past week.  It's a bit different than my usual article or even stories from the "Keeping the Public in Public Domain" series, but I  hope you'll see what storytelling possibilities exist in my presenting "History as seen by the 'average' person."
*************************