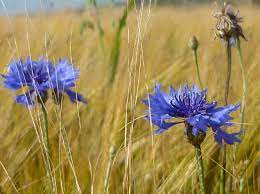 I love wildflowers!  Their cheery color reminds me how in Matthew 6:29 and Luke 12:27 our value is compared with them.  We are told "not Solomon in all his splendor" can compare with the brief glory of wildflowers and yet we are worth more.  That idea and the way "weeds" are anything growing where it's not wanted often cross my mind.  I certainly want them (more than grass which could be considered a weed by that standard).  Checking books that became Public Domain by failing to be renewed, I found a 1930 textbook of stories, Holiday-Time Stories, stamped Property of Jones School, Dist. #1 - Hampton Twp.  The author, Edna Groff Deihl, has nothing online about her, only her books.  Putting her name in as a search label here, I discovered TWO! posts in December of last year and also 2013  and each time it was her New Year's story of "The Three Bells" both times!!  It's a good story, but I'm surprised I missed the double posting.  This weekend is the Fourth of July and Deihl lets the story of the importance of Independence Day be told by wildflowers.

Before telling it I knew the name "cornflower" wasn't the way I originally knew the flower.  It was delightful to see the alternate name of "Bachelor Button" is also legitimate.  Since wildflowers fascinate me and I often try to identify them, I was surprised it wasn't listed at the wildflower identification tool, MyWildflowers.com.  There was a reason, neither name, nor it's scientific name of Centaurea Cyanus was listed...it is an escapee from being a cultured plant, even though now considered "a weed in arable crops."  Ah, yes, a weed is in the viewpoint.  I'll gladly grow them.

Another plant in the story, the Buttercup, is often talked about, but I wasn't sure if I'd ever seen it.  MyWildflowers gave a variety of pictures.  I was still uncertain.  It's flower is only about an inch in size and 2 or 3 feet tall.  Very similar are Creeping Buttercups and Swamp Buttercups, all with the same flower.  I was still uncertain if I'd seen it, but looked for it and its five petals on yesterday's walk.  Ah ha!  It's easily overlooked as it's so common.

Beyond those flowers, there are two things to mention further before the story.

Back in 1930 children probably knew of the old-fashioned Chinese hairstyle of the Queue.  It disappeared from fashion in the early 20th century.  Queues,  long associated with Asian men, would now be considered a racist stereotype.  The story compares a firecracker's fuse to what should be described now as reminiscent of that braided hairstyle from long ago in China's early history or you could simply say it looked like a person wearing their hair in a braid.

Beyond that antiquated view, the story gives a still needed reminder, not just for children of nearly a century ago, of the real reason behind Independence Day or the 4th of July.  That meaning goes way beyond a picnic, fireworks, or a holiday.  The explanation of the true meaning of independence and freedom keeps this old story worth our looking back. 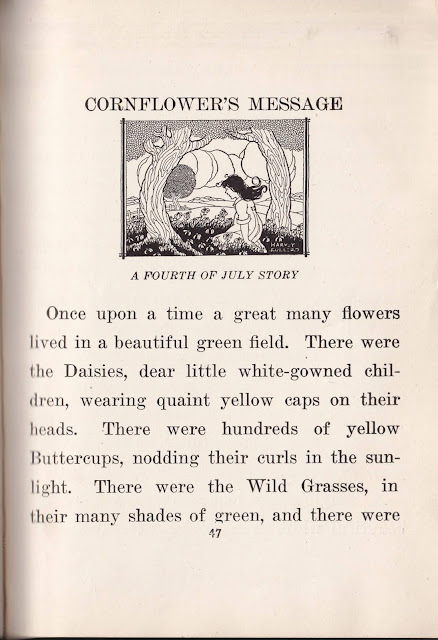 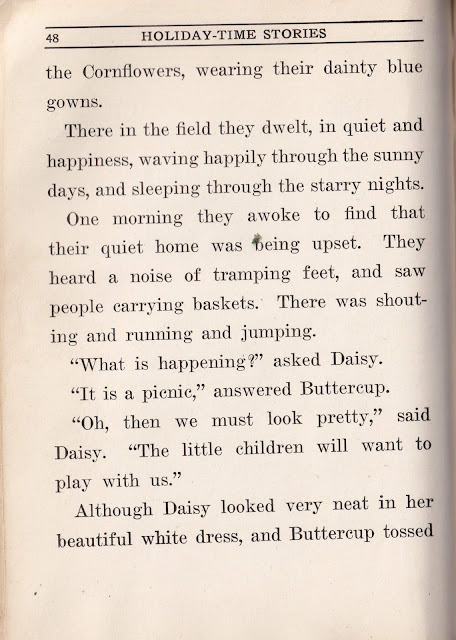 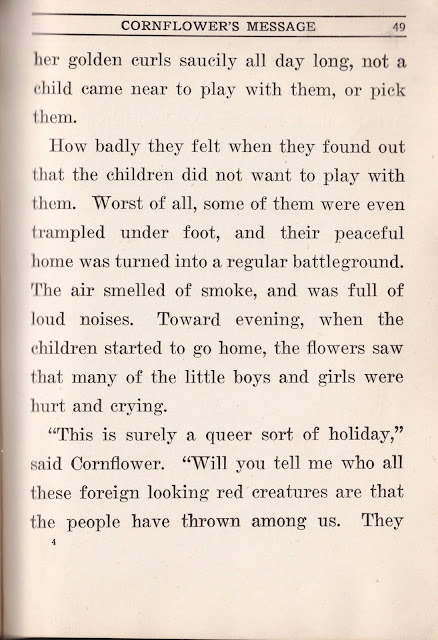 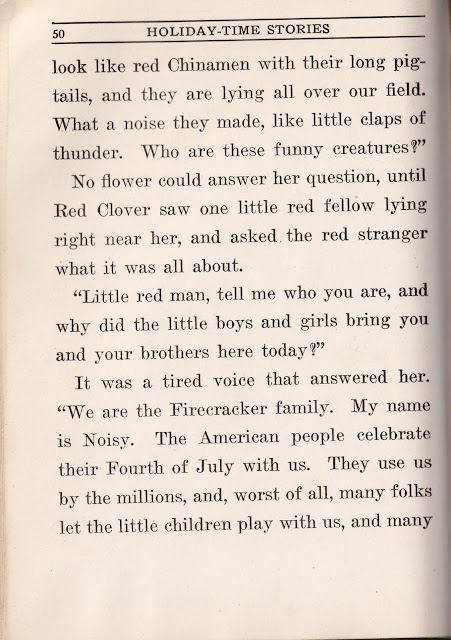 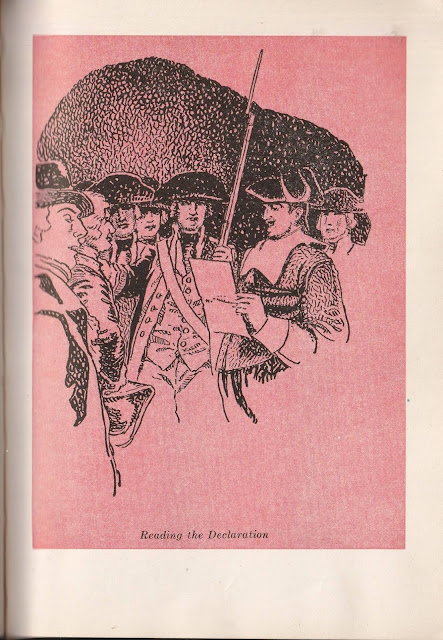 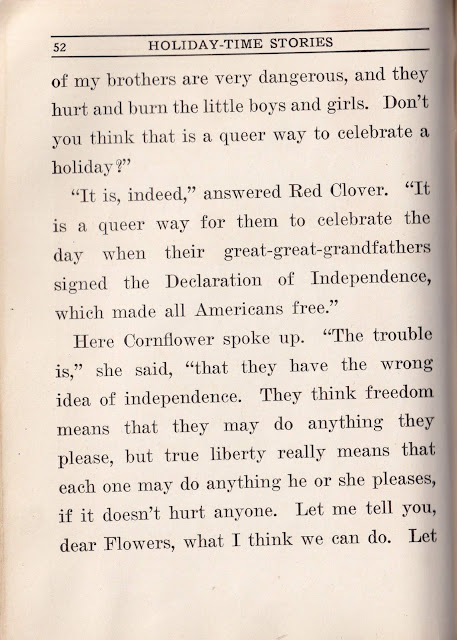 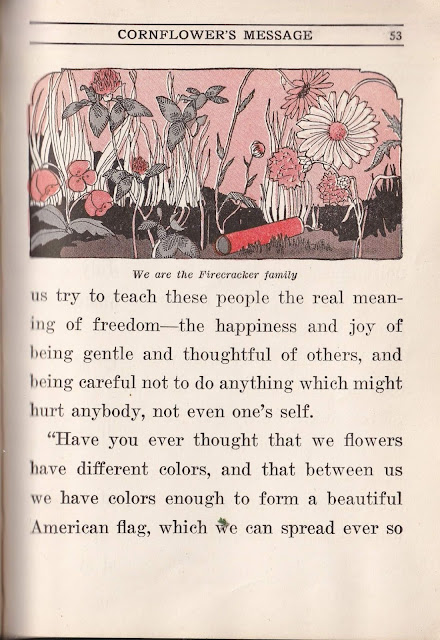 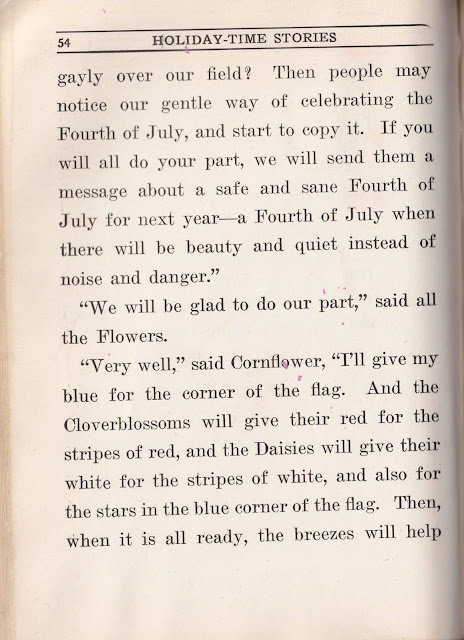 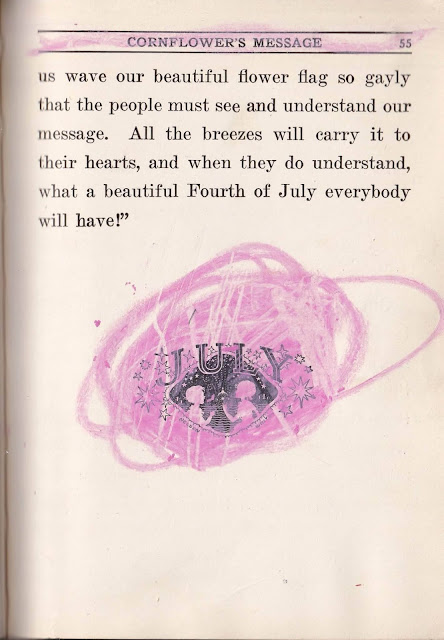 I can't help but smile at the crayoned addition to the story.  Some child matched the colors of Genevieve Fusch Samsel's illustrations.  I wonder if that is how the book was no longer "Property of Jones School, Dist. #1 - Hampton Twp" or if the added decoration earned  the child a fine? 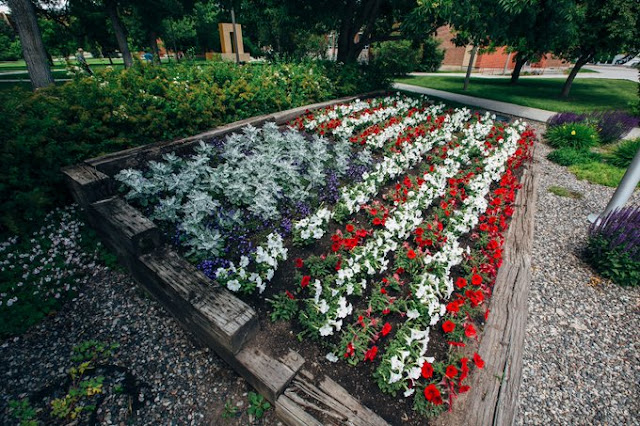 Flower Flag at the University of Montana in Bozeman