Fillmore - The Wood Maiden - Keeping the Public in Public Domain 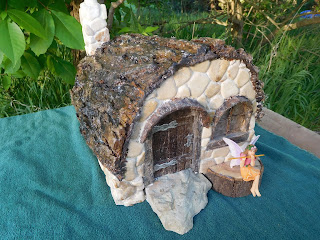 Remember when the first writing or speaking assignment every year in school was "What I did on my Summer Vacation"?  A bit of wood bark from a tree that came down sparked the idea of a fairy house.  The project started with me and my husband joined in.  At first I wanted to be a preschooler say, "NO!  It's MINE!", but his skills working with tiny N Scale railroad modeling couldn't be denied.  I knew better than to make a fairy and went looking on Etsy.com.  So many fairies!  I play Native American flute a bit and have four earlier posts about this.  When I saw this little fairy from NWWholesaler I knew she was the perfect choice for me.

Decided for this opening beyond the "Shelter in Place" posts to give a story of fairies and music.  The available selection is large indeed.  Frances Jenkins Olcott's The Book of Elves and Fairies is easily prowled with its own subject index.  I have the Dover reprint which omits the poetry beginning and ending each section plus a very few (five) stories.  I could understand the omission of two from Charles Perrault as they are easily available.  Lovers of Stephen King's The Tommyknockers may miss the omission of "Tom and the Knockers" as possible inspiration for the novel, and it would have helped the brief story of "The Knockers' Diamonds" that is included.  What caught my attention in the Project Gutenberg's posting the full book was the story of "Fairy Do-Nothing and Giant Snap-'Em-Up."  What a title!  I understand the story is moralistic, told with old-fashioned style, and they probably thought it was worth omitting, but oh if told or read with a sardonic style it's great!  I recommend this look at a boy who hates school lessons and loves eating "goodies."  Hmmmm parents trying to homeschool their children during the pandemic would never have that problem, would they?

Searching Olcott I chose "The Wood-Lady" listed as from Bohemia.  You may notice that's not today's story.  Why?  Well it does include a fairy orchestra (although it lists birds as the musicians), but it also has a girl, Betty, who is expected to help her mother in the production of flax into linen.  Here in Michigan we have a storyteller who not only tells stories, but is a weaver who can tell stories from that knowledge, Barbara Schutzgruber.  Barb and I have traveled and roomed together for a National Storytelling Network conference and, aside from her weaving knowledge, I wanted to congratulate her on receiving the Oracle award this year for the North Central Regional Excellence at the first-ever virtual conference.  Unlike previous conferences she had to sit there while we could see her close-up while she was praised.

Her acceptance speech stated, "Folktales shaped my belief that regardless of external differences, people are not that different deep on and showed me that the world is not one of Either/Or, but rather one of Both/And."  I've been struggling to find a way to say this during the current additional time of civil protest about human dignity.  If you go to the Oracle link (while it remains on Facebook) of the entire award ceremony you can hear her entire acceptance speech as well as seeing Michigan's other Oracle winner, Corinne Stavish, who not only won the Circle of Excellence award, but was on the original committee where the name "Oracle" was chosen as an acronym for what it represents.  If you watch the ceremony, you'll also see Corinne introduced by past Oracle recipient, Michigan's Judy Sima and another from Yvonne Healy, who has relocated to Denver, but was a long-time Michigander and at one time chair of the NSN board.

By now you're wanting the story, but why did I use the version by Parker Fillmore in Czechoslovak Fairy Tales instead of Olcott's?  I called Barbara and she led me to his superior version.  (I knew it was more accurate as the girl is called Betushka, and that was the familiar form of a name probably changed from the Czech/Bohemian Alzbeta, or in English, Elizabeth, which of course is nicknamed Betty among other things.)  Barb especially pointed to how Betushka uses her head quite literally to handle the flax since she doesn't have a distaff.  For us non-spinners, think of using your arm to wrap a cord or, in this case, unspun fibers.

Betushka normally is able to take those unspun fibers, wrap the flax around her head to fill her spindle even while tending goats, eating, and dancing.  Let's hear it for this tale of female multitasking until distracted by fairy music from the woods. 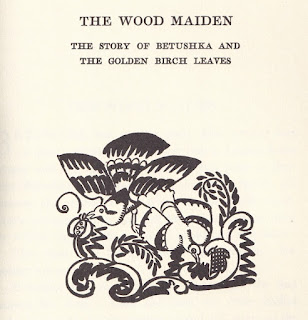 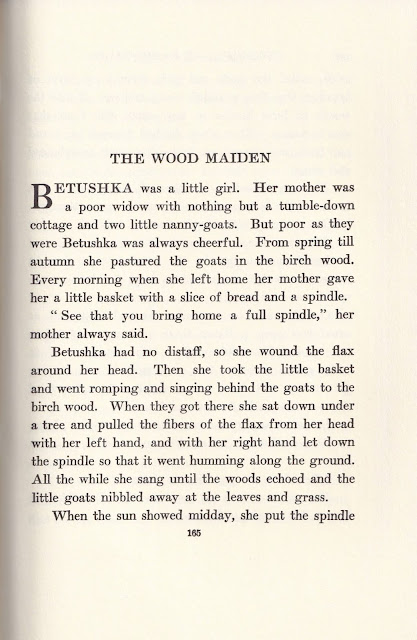 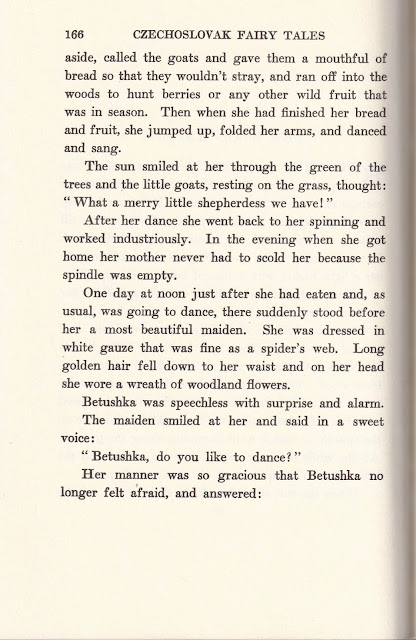 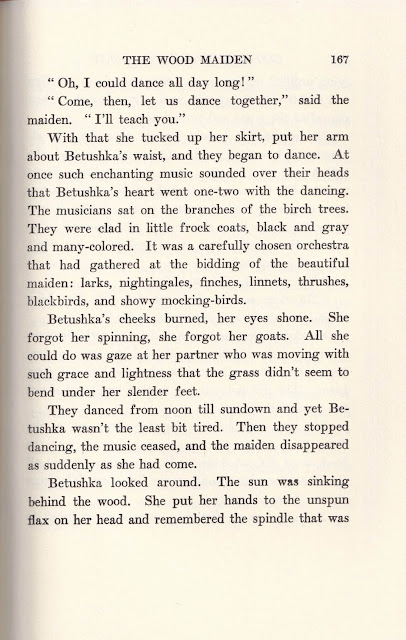 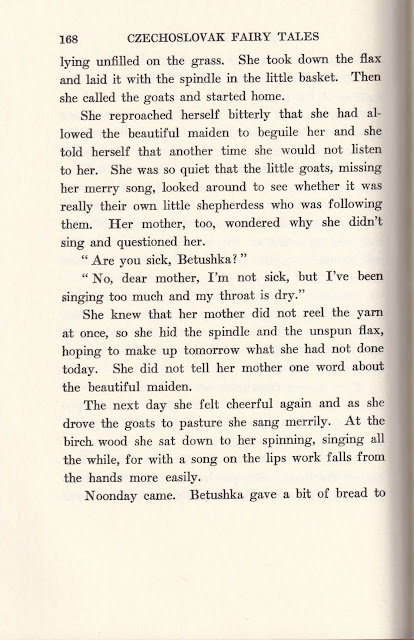 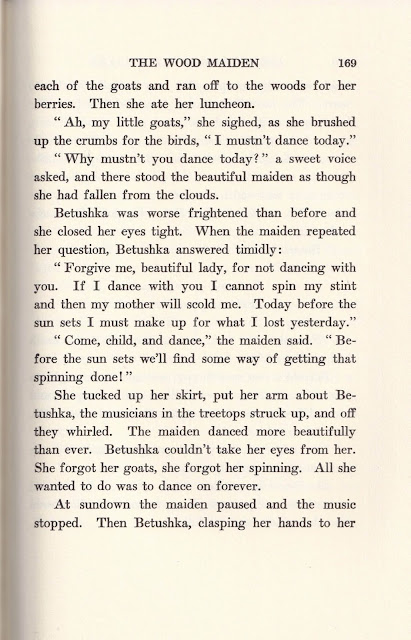 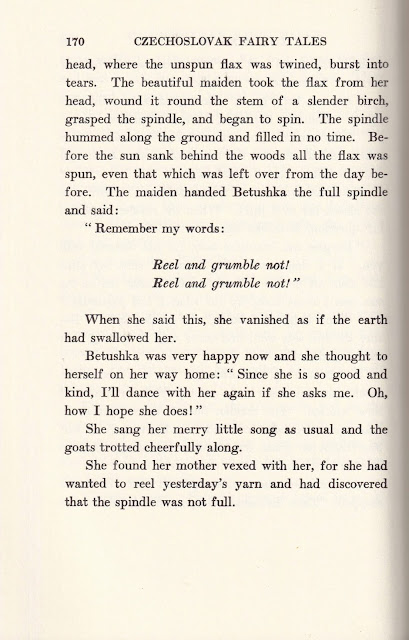 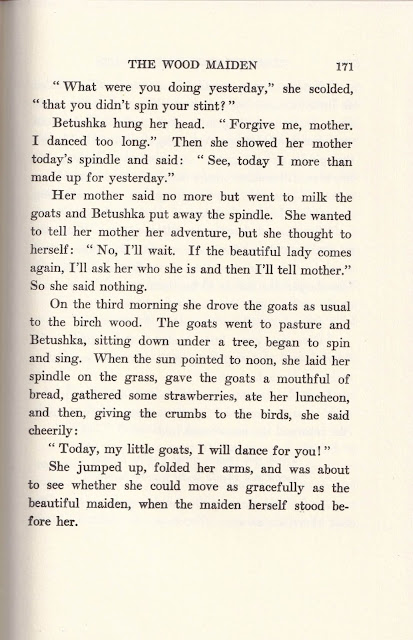 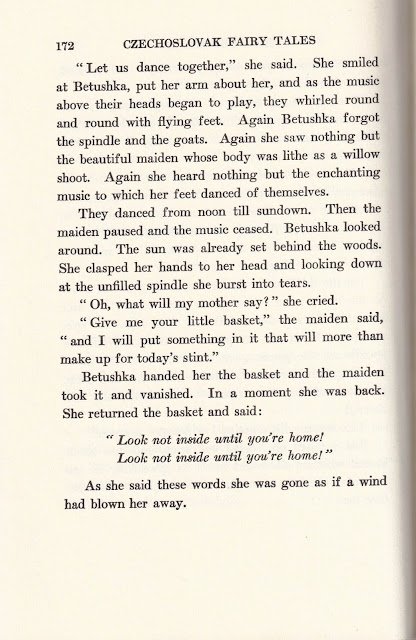 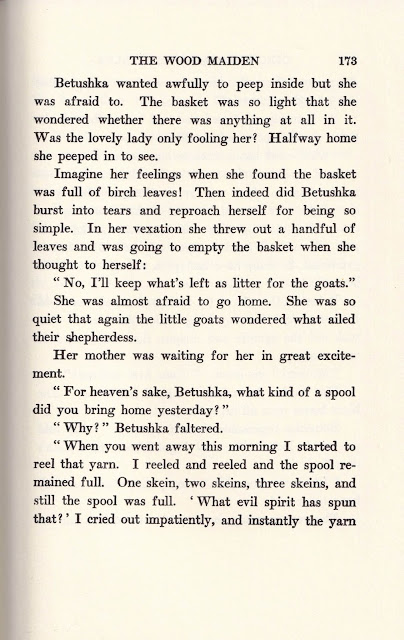 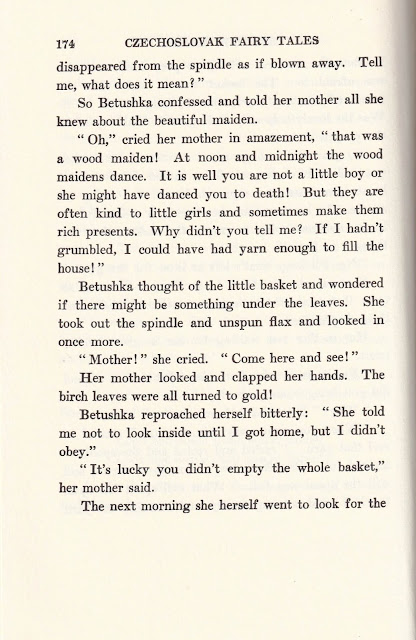 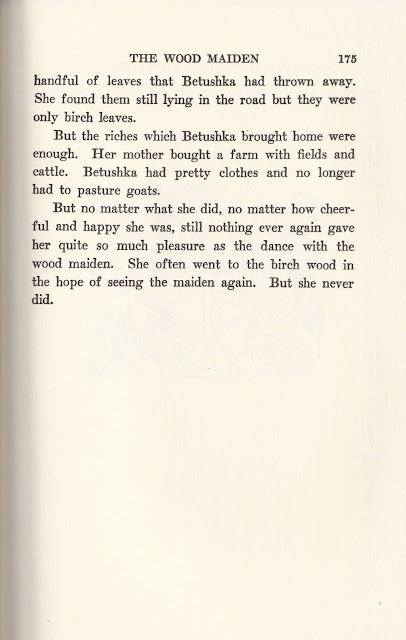 Barb and I both were happy she didn't throw away any more of those leaves!  Adding to all of that I guess we should be careful when hearing fairy music.  In my searching I found several stories where the fairy music can entice you to their world and keep you -- I'm saving one for Halloween as that's when the story occurs. 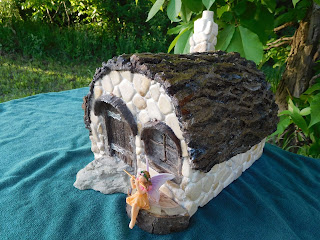 As for this story versus the Olcott version, her re-telling is shorter, but doesn't seem to leave anything out, except her acknowledgement section omits crediting its source.  Hmmm.  His book appeared in 1919, while hers was 1918.  He worked with the original Slavic texts, but she gives no clue to how she learned the story.  Today's researchers would expect that.

While looking at tales of fairies I found one in Andrew Lang's multi-colored books I dearly loved.  It will probably appear here next week.  We'll see, but for now, this is the end. 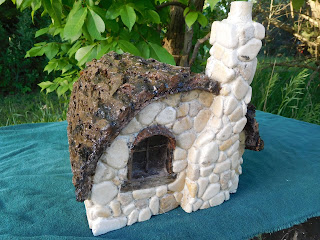